Research papers on the no child left behind act The Every Student Succeeds Act. Federal spending on schools. Votes in both chambers of Congress are expected over the next couple weeks. So what is in the ESSA, when it comes to accountability, testing, programs, and more? 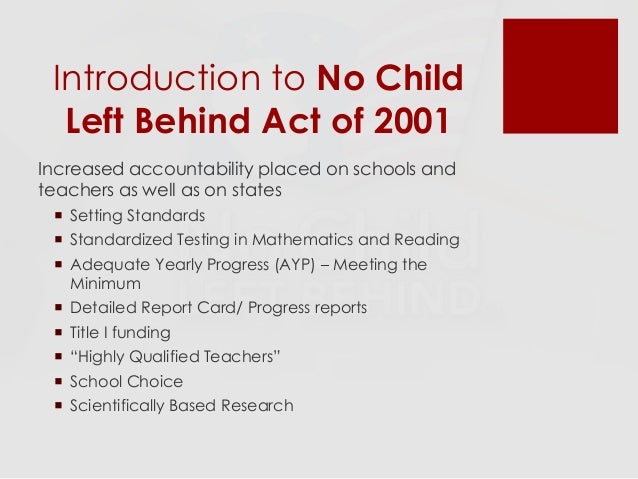 Your updated cheat sheet here. Scroll down further if you want the nitty-gritty details on accountability, including a few new tweaks from the framework we posted last week. And scroll down even further if you want more details on other aspects of the deal an update of past Politics K cheat sheets, including information on how the transition from waivers and current law will work, English-language learners, which programs made the cut, teacher provisions, and much more.

And find reaction to the bill here. States would still have to test students in reading and math in grades 3 through 8 and once in high school, and break out the data for whole schools, plus different "subgroups" of students English-learners, students in special education, racial minorities, those in poverty.

But beyond that, states get wide discretion in setting goals, figuring out just what to hold schools and districts accountable for, and deciding how to intervene in low-performing schools. States and districts will have to use locally-developed, evidence-based interventions, though, in the bottom 5 percent of schools and in schools where less than two-thirds of students graduate.

States must also flag for districts schools where subgroup students are chronically struggling. The federal School Improvement Grant program is gone, but there are resources in the bill states can use for school turnarounds.

And, in a big switch from the NCLB waivers, there would be no role for the feds whatsoever in teacher evaluation. Another big switch from waivers: More on just what those are below. Secretary of Education authority is also very limited, especially when it comes to interfering with state decisionmaking on testing, standards, school turnarounds, and more.

There are definitely provisions in this bill that state and district leaders and civil rights advocates can cite to show that states and schools will have to continue to ensure equity. But, it could prove tough for the U. Department of Education to implement those provisions with a very heavy hand, without at least the threat of lawsuits, some analysts say.

Department of Education under President Barack Obama. The nitty-gritty details on accountability: States would still have to submit accountability plans to the Education Department. These new ESSA plans would start in the school year.

The names of peer-reviewers would have to be made public. And a state could get a hearing if the department turned down its plan. That ship has sailed, anyway. Instead, states can pick their own goals, both a big long-term goal, and smaller, interim goals.

These goals must address: Goals have to set an expectation that all groups that are furthest behind close gaps in achievement and graduation rates. What kinds of schools will states have to focus on? States have to identify and intervene in the bottom 5 percent of performers, an idea borrowed from waivers.

These schools have to be identified at least once every three years. And some, like Massachusetts, do it every single year. States have to identify and intervene in high schools where the graduation rate is 67 percent or less.

States, with districts, have to identify schools where subgroup students are struggling. What do these accountability systems have to consider? The list of "indicators" is a little different for elementary and middle schools vs.

Systems for Elementary and Middle Schools: States need to incorporate a jumble of at least four indicators into their accountability systems. That includes three academic indicators: That could be growth on state tests, so that states would have a mix of both growth and achievement in their systems, as many already do under waivers.

And, in a big new twist, states must add at least one, additional indicator of a very different kind into the mix. Importantly, though, this indicator has to be disaggregated by subgroup. States also have to somehow figure in participation rates on state tests.No Child Left Behind.

Choosing the position to introduce in papers on No Child Left Behind Act In fact, there are three major positions you can take. THE IMPACT OF NO CHILD LEFT BEHIND ON STUDENT ACHIEVEMENT Thomas Dee Brian Jacob Working Paper and do not necessarily reflect the views of the National Bureau of Economic Research.

Overview; Abbreviations of Commonly Cited Sources Below are a few examples of commonly cited sources that often incorporate abbreviations. No Child Left Behind Act of , Pub.

L. No. With the No Child Left Behind Act of (NCLB), states receiving federal funds were, for the first time, required to report the educational progress of their English Language Learner (ELL) students.

No Child Left Behind Act of